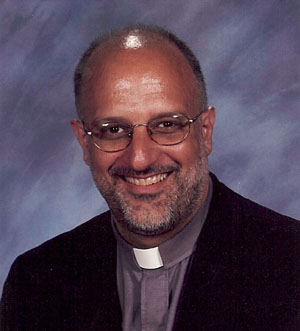 Fr. Luke A. Veronis serves as the Director for the Missions Institute of Orthodoxy Christianity, which is located at Holy Cross Greek Orthodox School of Theology and teaches as an Adjunct Instructor at both Holy Cross and Hellenic College. He taught for four years at St. Vladimir’s Orthodox Theological Seminary in NY (2005-2008), and guest lectured at St. Herman’s Seminary in Kodiak, Alaska. He serves on the Board of Directors for the Orthodox Christian Mission Center (OCMC) in St. Augustine, FL, and the Overseas Ministries Study Center (OMSC) in New Haven, CT.

Fr. Luke also pastors Sts. Constantine and Helen Greek Orthodox Church in Webster, MA since December 2004. He and his wife Presbytera Faith have witnessed a wonderful turnaround of this parish, which has grown from 90 families in 2005 to presently 175 families.

Fr. Luke has been involved in the Orthodox Church’s missionary movement since 1987. Together with Presbytera Faith they served as a long-term cross-cultural missionary in Albania for ten and a half years (1994-2004), and he as a short-term missionary in Kenya, Tanzania, Uganda and Ghana for eighteen months (1987-91). Since 2010, Fr. Luke teaches a summer class entitled The Missiology of Archbishop Anastasios (Yannoulatos) of Albania, where he takes 12 students from various Orthodox theological schools or seminaries to Albania for two weeks. He has led four short-term mission teams from Sts. Constantine and Helen Church to work with Project Mexico in building homes for the desperately poor in Tijuana, Mexico.

His published books include Go Forth: A Journal of Missions and Resurrection in Albania (2010), Lynette’s Hope: The Witness of Lynette Katherine Hoppe’s Life and Death (2008), and Missionaries, Monks, and Martyrs: Making Disciples of All Nations (1994).