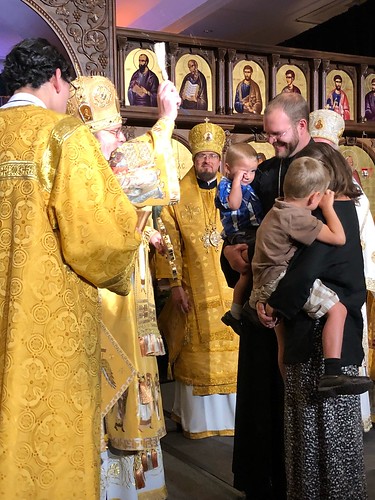 Over the course of the week, many valuable talks and sessions were offered. One was presented by our very own Fr. Martin Ritsi, in which he described the role that OCMC plays in the Orthodox Church. He summed it up well: “What do we do? Changing lives and saving souls, by God’s grace. How do we do it? Bringing people to Christ, establishing the Church, and sharing His love. That’s what we’re about.”

Very encouraging, however, was the fact that the Church’s responsibility to participate in missions and evangelization was not only mentioned in Fr. Martin’s presentation, but was a recurring theme in talks throughout the entire council. That served as a good reminder that missionary work is, at some level, an intrinsic part of every Christian life and ministry.

This emphasis on missions was even manifest directly, when the entire body of the council gathered to commission the Moore family at the end of the Divine Liturgy, as they begin exploring South Korea for the next phase of their missionary service. With representatives from Orthodox Churches all around the world gathering to bless the Moores and send them off, a true icon of missions in the Church was portrayed.

This was a living example of what His Beatitude, Metropolitan Tikhon, was describing in his opening address, when he quoted St. Tikhon: “We must share our spiritual richness, truth, light, and joy with others who do not have these blessings. And this duty does not only lay upon the pastors and missionaries, but on the lay persons as well, since the Church of Christ, according to the wise comparison of the Holy Apostle Paul, is the body, and every member takes part in the life of the body.”